This positively scrumptious recipe is brought to you by the fabulous Not Quite Nigella. She really is fabulous. You must check her website out if you haven’t already. Although I’m sure you have.

Her original recipe was for Apple and Maple Tarts … 10 perfectly sized little tarts.

However, I am quite known to have a short temper. This short temper likes to come out and play when I go food shopping. Too many people. Shoved around too much. Can’t find where everything is. Queues too long.

SO, after running around trying to find little aluminium pie tins for twenty minutes, I gave up. Someone was going to get hurt if I didn’t abort the mission.

Thus, I was stuck with no alternative but to turn Apple and Maple tarts into Apple and Maple PIES. Which were still delicious so it was not such a big deal but I still think tarts would have been easier all round.

Anyway, I’ve altered the recipe slightly to show you how I made the pie, however there are two link backs to Not Quite Nigella’s page where you can see the original recipe if you want to have a go at the tarts. 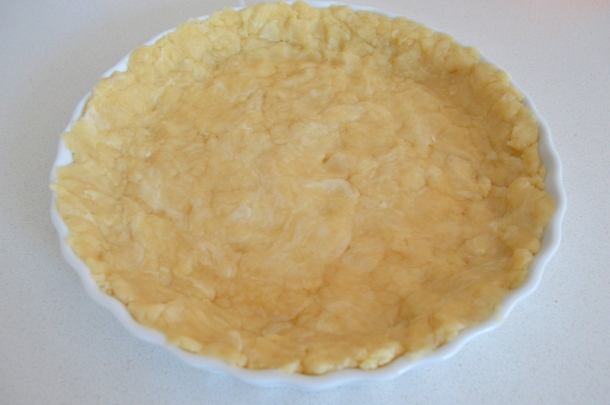 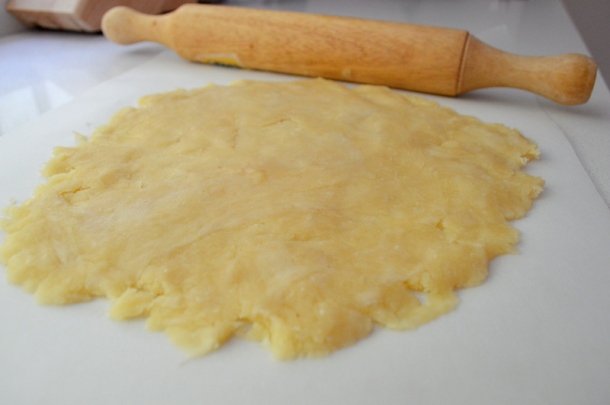 2. Mix flour, salt and sugar, then add the milk and stir, then the oil and mix until is resembles pastry.

3. Split the pastry in two. Press half the pastry along the base of a standard pie tin as well as up the sides. Roll the other half of the pastry with a rolling pin until it is in a circle, a bit smaller than the diameter of the pie tin. Place the pastry in the freezer.

3. Mix all of the filling ingredients except for the butter together until combined well.

6. Pour into pie tin and then dot the pie with the cubes of butter.

7. Place the rolled out pastry on top of the pie, making sure the ‘pastry lid’ is small enough to leave a vent at the top.

8. Bake for roughly 15-20mins until slightly golden on top.

It’s just like the perfect apple pie. Only better. Because it has a delicious amount of maple syrup in it. Maple syrup is just beautiful.

I wish I’d been able to do the little tart version because it is easier to take to a friends house and easier to serve in small portions like that.

Also, the when cutting the pie to serve, it can get a little messy on the plate. Because of the vent gaps, it’s hard to scoop it out. But also, I don’t think I made the pastry lid big enough so definitely try make it cover the apple filling more.

But the tarts definitely make it all nice, neat and compact and you can just eat it out of the foil. Check out Nigella’s Recipe for how to do the tarts.

Either way, the taste is the same. And the taste will blow your mind and tastebuds. 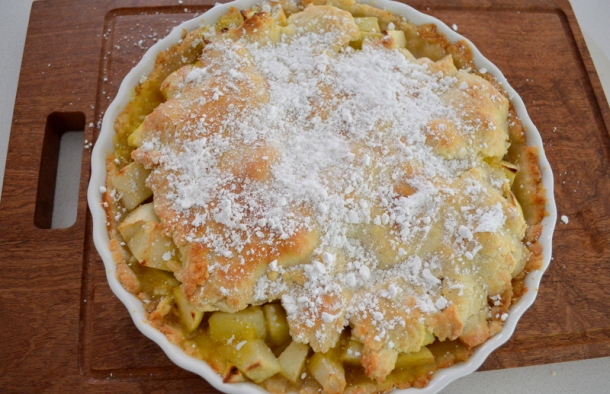 Firstly, the pastry. Such. Greatly. Textured. Pastry. It’s thick but still crumbly, almost like shortbread but more dense. It’s not sweet but it’s not plain. It’s right in the middle and perfectly balanced.

The apples with the maple syrup are tantalisingly delicious. Green apples have the tendency to be a little on the sour side (OK, a lot on the sour side) but coupled with the really sweet and earthy flavours of the maple syrup and you’ve got an explosion of deliciousness in your mouth. Add the beautiful spice touches of cinnamon and nutmeg and you’re smiling like there’s no tomorrow.

All I can say is YUM. Great served with ice-cream or whipped cream. Great after dinner dessert. Pure greatness.

30 thoughts on “Apple and Maple Pie”