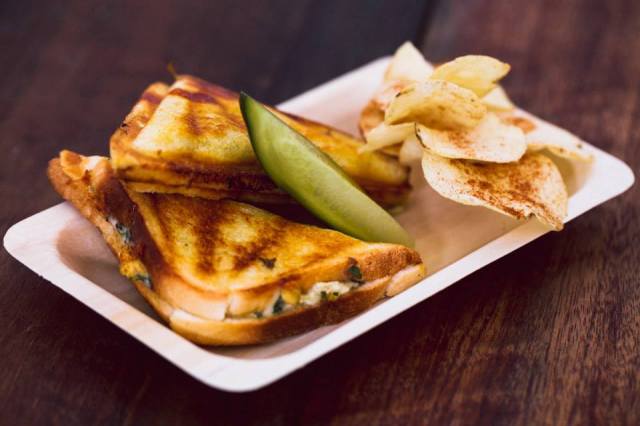 If there ever was a perfect combination of food and booze, jaffles and beer would certainly be in the running. There’s not much more you crave after a night out than a warm, cheesy and toasty jaffle. And that’s exactly where the inspiration for the newly opened bar, The Publican, on the Eastern Hotel’s ground floor in Bondi Junction came from.

Former chef at The Bentley in Surry Hills, Matt Fitzgerald, who is also the chef at Chimmi’s Bar Cantina on the third floor of The Eastern, loves the combination of jugs of beer and jaffles.

He said “jaffles are food that if you’ve been drinking, go down very well. Being inebriated and toasted sandwiches almost go hand in hand.”

The Publican serves your good old fashion jaffles like baked bean jaffles, but they’ve also got the pork belly with spice apple. However, it’s not just your savoury jaffles being served, there’s also the unique concept of a dessert jaffle which Matt thinks most people wouldn’t have thought of, like a salted chocolate and walnut brownie jaffle.

Beer and jaffles aside, the ambience and certainly eclectic ornamentations at The Publican are enough to make it a stand-out watering hole in Bondi Junction. With a cascade of ciders and beers at the bar, a luxurious red velvet lounge, a vintage telephone booth circa 1920s London and a stack of vintage suitcases, it’s hard to pinpoint the exact style The Publican is going for. Not to mention the teal green walls and faux fireplace with a collage of vintage postcards pinned above it. Yet somehow the myriad of styles tie in together, and it works.

With The Eastern previously known as being quite rough and ready, The Publican is a comfortable and stylish new place with a massive list of Australia craft beer and ciders with an appealing menu of jaffles to pair it with.

10 thoughts on “The Publican at The Eastern, Bondi Junction”